Chris and Trailbound.co really need no introduction.  If you are an alive and breathing dirtbike/enduro rider than you’ve more than likely seen Chris’ pictures on the TrailBoundco Instagram page.  If not, please go check it out, follow and GET STOKED.

One of the first upgrades that I did to my 2017 250xc was replace the stock OEM reed valve to the Vforce4 reed valve. I had heard numerous stories of guys breaking off the fins on the stock ones and just didn’t want to have to deal with that issue. Some say that the Vforce improves responsiveness and low end torque but I really didn’t see noticeable performance differences, I mainly did it out of a preventative measure. There’s so many things that can and do break on the trail that I want to minimize any issues I might have to deal with ahead of time.

When you compare the construction of the OEM and Vforce, the Vforce appears to be superior. You have less parts and a more streamline design. When I compared the two against light, on the OEM I was seeing some light gaps at the top corners which means they are not sealing properly and probably hindering performance. Overall it seems like the shape of the Vforce is more streamlined with higher quality material allowing for thinner pieces and in turn better airflow.

Fast-forward 8 months and 200 hours later, I’ve been having some issues with my 250 running really rich. I started fouling plugs while I was out riding in Idaho and Montana. I adjusted the lectron metering rod 3/4 of a turn to lean it out. After cleaning out the super clogged up spark arrestor and turning the metering rod down it was still feeling rich and I also noticed some fuel at the bottom of the airbox. Talking to some other I was thinking that maybe the gas in the airbox had to do with the reeds. When I pulled the reeds and compared the old Vforce to the new ones under light I did notice that the old ones showed more of a glow which makes me think they have thinned over time. I still need to run the bike under hard conditions and check the bottom of the airbox to see if it fixed that. 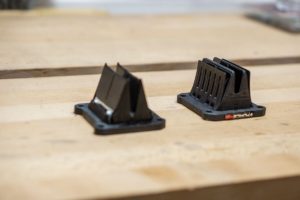 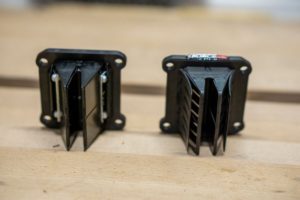 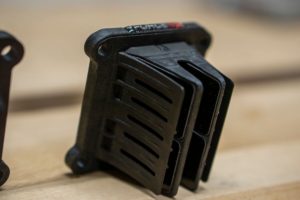 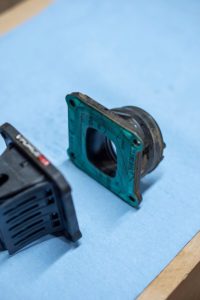 Overall I think that the the Vforce reeds are a well made and high quality product and make for a  good upgrade as a preventative measure to keeping your bike running well.